Jian's first FB post was beautifully crafted to elicit support. And elicit support it did: his fan page gained 20,000 fans and the post itself received over 100,000 likes and 33,000 comments.

I started scraping them to do some analysis on the sentiment of the nation. There were some allegations that Jian's PR team were censoring negative comments. That seems possible, and if it was happening, that's Jian's right. More interesting to me, however, is when people choose to self-censor by going back and deleting their original comments.

Here's a sampling of the 510 comments whose users have since decided that they should perhaps reserve judgment:

You will win. (female)

I really admire your integrity Jian. Thank you. (female, 1 like)

Jian, I look forward to your phoenix rising from the ashes and shame on your ex girlfriend, the free lance journalist, and CBC. (female, 1 like)

Your bravery is overwhelming! Stay strong, honest and hold your head high. I believe that your father would be so proud of you. (female)

Fight the power, Jian! Q is nothing without you. I support you, unequivocally!!! (female, 1 like)

I am not going to read through this entirely because I am totally not interested in what you do in the bedroom Jian. Only what you say on the radio. To be perfectly blunt firing you is absolute bullshit. I am a feminist and I support you. Until you have been proven guilty of something criminal in a public court of law, I support you. Your bedroom is your business. (female, 7 likes)

Sue the pants of that cunt whore ! (male)

HELL HATH NO FURY LIKE A WOMAN SCORNED .... Don' t forget to sue that bitch who started this whole circus (male, 4 likes)

Jesus Christ we are all guilty of kinky sex from one degree or another. This is retarded. No one has the right to judge another. But this skank who you dumped is just a crazy Biatch who can't take rejection. What a mess. Keep being honest about it. Fight it - sue them. You will win. (female, 1 like)

if not consensual, why di she not call the cops? (male, 4 likes)

My sincere condolences. What that girl did and CBC's reaction both seem very wrong. I hope you get your job back at CBC, or else something better comes to you. (female)


Of course, what's worse is the comments that haven't been deleted yet:

sounds like ur ex is a cunt ass bitch (male)

Basically your ex is a dumb cunt and you need her wacked. I feel your pain man. (male, 2 likes)

For all of us who have ever been stalked, falsely accused and lied about, nail that cunt to a cross (male, 3 likes)

Your ex is a cunt. Sorry, but yeah, she gives women a bad name. Funny thing..she judges YOU for stuff you did TOGETHER. "Real woman"there. I hope ot gets easier for you. I commend you forncoming forward (female, 5 likes)


And now for some charts, because, hey, who doesn't like a good set of charts?

In my first scrape of ~28,000 comments, around 10% of them were expressing condolences to Jian. But how sorry were the commenters, really? 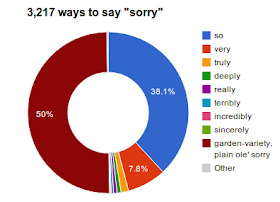 You can also see the impact of crafting a well-written PR statement by the themes people echo in their comments of support. See if you can line up the sentiment in the comment with the sentence in the Facebook post that encouraged it: 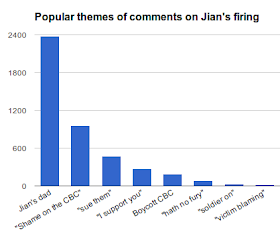 Unrelated to whether or not the allegations against Jian are true or false, is it any wonder that women would hesitate to come forward with claims of abuse? 80 people felt the need to quote a hackneyed 17th century play about how women get testy when they're scorned, but only 17 people raised the possibility that people were jumping the gun and blaming the victim.

Jian posted a new Facebook post today. The 1,103 comments thus far have a decidedly different tenor. I look forward to seeing how they shake out compared to the first batch.
Colin! at 8:55 AM